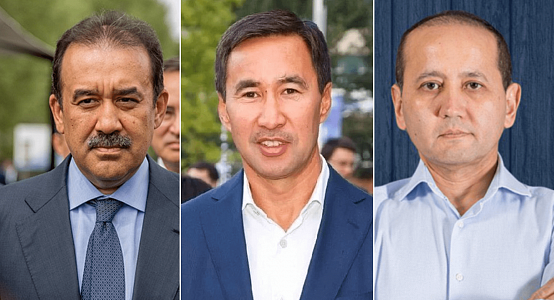 “The now arrested members of the investigative-operational interdepartmental group (SOG) of the KNB/MVD/GP under the leadership of Karim Massimov committed a “legal vandalism” against me, my family, relatives, colleagues and friends,” it says in the Mr Tokmadi’s letter to President Kassym-Jomart Tokayev.

KazTAG has posted about this before. Kazakh Telegraph Agency: https://kaztag.kz/ru/

Almaty. 9th of March. KazTAG – Imprisoned businessman Muratkhan Tokmadi pleaded not guilty and said that people from KNB, the Ministry of Internal Affairs (MVD) and the Prosecutor General’s Office (GP) led by the former chairman of the National Security Committee (KNB) Karim Massimov forced him to confess to the murder of banker Yerzhan Tatishev at the instruction of the banker Mukhtar Ablyazov.

“I, Muratkhan Tokmadi, am a citizen of the Republic of Kazakhstan with a 40 years sports, social and labor experience, worked my way up from a carpenter’s apprentice to the owner of two industrial glass processing plants and have been awarded a number of orders, medals, Altyn Sapa, titles and regalia – from the hero of the TV-Show “Success Factor” on the Khabar TV channel (a week before arrest) on July 12, 2017. Suddenly I turned into the most deprived of civil rights political prisoner in the country in front of my frightened wife and 10-year-old daughter. The now arrested members of the investigative-operational interdepartmental group (SOG) of the KNB/MVD/GP under the leadership of Karim Massimov committed a “legal vandalism” against me, my family, relatives, colleagues and friends,” it says in Mr Tokmadi’s letter to President Kassym- Jomart Tokayev, a copy of which is at the disposal of the editors of the KazTAG agency.

According to the businessman, the SOG itself was led by KNB Colonel Ruslan Iskakov.

The businessman said : “Еhey “convinced” me to sign procedural and cooperation agreements (PTAs) using threats, beatings, torture, moral and psychological pressure on my family, falsification of criminal cases 20-30 years ago against me, three criminal cases against my wife, arrests of my relatives, blocking businesses, arrest of property and family accounts, and many other methods. According to their conditions, I had to admit: 1) the fact of extortion from a former partner S.A. Nepropekin’s share/property, allegedly taking place in 2004-2005; 2) the murder of Yerzhan Tatishev ordered by Mukhtar Ablyazov. At the same time, “We don’t need Mr Nepropekin, this is only to level out the political background of your arrest. We don’t need you either – we only need MA”.

As Tokmadi noted, in response to this “offer”, he “convinced Mr Iskakov to let him undergo a polygraph test to record that he never knew, never met, did not speak on the phone with MA, and never had anything to do with criminal cases 20-30 years ago.”

Businessman emphasized that: “In order to “convince” me to sign the PTAs, in addition to torture, I was placed in the psychiatric department of the KNB hospital in Almaty with a full set of “psychotropic therapy”. After four months in this “regime”, as well as after threats “to put my wife in jail for 15 years, and send my younger children to an orphanage” – on November 18, 2017, I was forced to sign a PTAs. On March 16, 2018, the judge Taraza M. Tlepov, announcing the verdict, said: “Your PTAs are in the case, they will come into force after the sentence to the guilty person.” Mr Ablyazov was sentenced on November 27, 2018. A year later, in November 2019, in response to the family’s repeated appeals about the application of the PTAs, namely their main point – “the imposition of a more light punishment than provided for this crime”, the prosecutor of the Zhambyl region Mr Kusainov Zh.K. said: “The sentenced period is already minimal,” thereby confirming our initial fears: the procedural agreement was a lie!”.

He noted that this is confirmed by further responses from the Prosecutor General’s Office to his wife in response to her four letters addressed to Mr Tokayev.

The businessman said: “After her another letter in December 2020, the GP petitioned to reduce my sentence by only six months, and the Zhezkazgan court in April 2021 satisfied this minimum, thereby leaving me the minimum term of 10 years and again violating the main condition of the signed PTAs! On November 24, 2021, at the first short-term date in 5 years, my wife said with fear: “The KNB told me that if you don’t keep silent even in solitary confinement, you will never leave! He didn’t calm down in SI-18, the hell of the camp couldn’t calm him down, then what to expect from him at freedom?!”. The administration of institution 159/25 Zhezkazgan ignored all my appeals, for trying to send letters to you I was twice sent to a punishment cell for a week, and letters home, to state bodies, to deputies were blocked. Therefore, during the first long date in five years in February this year, me and my wife decided to contact you, Mr. President, through this open letter,”.

According to him, he has been serving a sentence for five years for a crime he did not commit.

Mr Tokmadi concluded: “This whole story, which caused so much suffering to me and my relatives, was invented and implemented by a group of the National Security Committee officers headed by Mr Massimov and supported by the State Prosecutor’s Office, the Ministry of Internal Affairs, and the courts. Their main goal was the extradition of Mukhtar Ablyazov, the main enemy of N. Nazarbayev. However, they failed, in January of this year they all were arrested, and the truth about their numerous crimes is gradually becoming known. Based on the foregoing, I ask you, the guarantor of the Constitution, to ensure the triumph of justice and legality, to review my case taking into account the above and previously sent to you factors, punish the guilty, to restore my honor and dignity and to return my lawful freedom! “Шыншыдық пен әділет – әр адамға қажет қасиет!”.

A copy of Mr Tokmadi’s letter was provided to KazTAG by his wife.

Agency editorial office offer the authorized bodies competent to comment on the described situation to consider this publication as an official request for comments regarding the information provided by Mr Tokmadi.