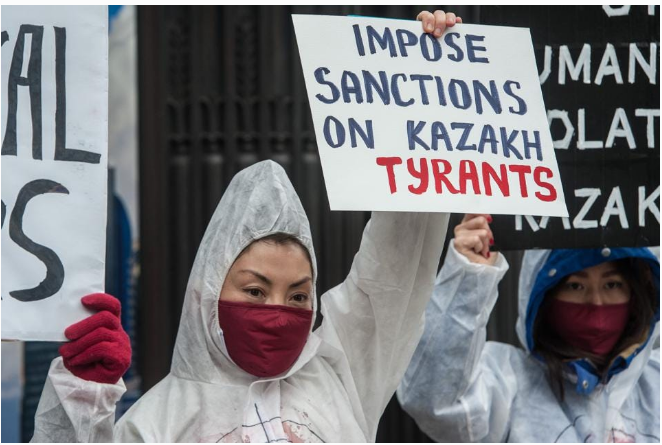 Kazakhstan-based billionaires worth over $14 billion are likely to be targets of new sanctions, says a leading member of the U.K. parliament. Labour MP for Barking Margaret Hodge told the house on Thursday evening that the U.K. needs to assume responsibility for turning a “blind eye” and helping the Kazakh regime “launder and spend its dirty money.”

Following fuel-price protests that swept Kazakhstan last month–leaving 225 dead, 4,500 injured and 10,000 arrested, and leading former president Nursultan Nazarbayev to finally leave the country–politicians have been debating the U.K.’s role in preserving the nation’s ruling regime. The wealth of Kazakhstan’s elite businessmen has now fallen under the spotlight, especially the role of financial crime enabled by London’s banks, legal services and the use of prime real estate as a store for ill-gotten gains.

In a damning speech drawing on historic allegations of wrongdoing, and protected from defamation claims from the billionaires by parliamentary privilege, Hodge called out a number of the country’s billionaires and best-known business figures.

Timur Kulibaev and his wife Dinаra Nazarbayeva (Nazarbayev’s daughter), Hodge said, “Ha[ve] faced money laundering and bribery investigations” in non U.K. jurisdictions, adding that Kulibaev was worth $2.9 billion, according to Forbes, and owns at least $80 million of U.K. real estate. Kulibaev and Nazarbayeva denied the allegations and Swiss prosecutors dropped the case against Kulibaev in 2013.

Hodge accused Vladimir Kim–Kazakhstan’s richest person–of being a proxy owner of Kazakhmys plc, the first Kazakh company to list on the London Stock Exchange. A Global Witness report alleges the company is actually controlled by Nazarbayev. Kazakhmys plc board denied the allegations and told Global Witness that the company had undergone comprehensive due diligence procedures before the company listed in 2005.

Mining tycoons Alexander Machkevich and Patokh Chodiev from Eurasian Natural Resources Corporation Limited (ENRC) caught flak from Hodge, over a 2013 investigation from the U.K.’s serious fraud office that followed allegations of bribery to African political figures. The U.K.-based Law Society Gazette reported in June that the SFO had yet to bring any charges on ENRC who deny any wrongdoing. The investigation is ongoing.

And, finally, Hodge called out businessman Bulat Utemuratov over his role in the Nazarbayev regime as his former chief of staff. Utemuratov made his fortune in 2007 when Italian bank UniCredit purchased 92% of Kazakhstan’s ATF Bank for $2.1 billion.

Other tycoons known to Forbes readers were mentioned in the speech too, including Kairat Satybaldy, the mysterious former intelligence chief who was once a major shareholder of London listed fintech Kaspi. (Kaspi made billionaires of its major shareholders Mikhail Lomtadze and Vyacheslav Kim in October 2020.) Hodge describes Satybaldy as “enjoying significant wealth through offshore structures” as a “key playe[r] in Nazarbayev’s inner circle, involved in the current power struggle that is undermining peace and security.” A spokesperson for the National Security Committee of the Republic of Kazakhstan, where Satybaldy is first deputy chairman, did not immediately respond to the allegation by email.

Nurali Aliyev, Nazarbayev’s grandson, was subject to a failed attempt by the U.K. authorities to use a so-called McMafia order to explain his ownership of a number of London properties, including one on London’s prestigious Billionaire’s Row.

Hodge cited Forbes’ estimated net worths for these Kazakh billionaires. In all, Forbes estimates the collective net worths of the tycoons called out by Hodge to be around $14 billion. Hodge concluded her speech by demanding the government commit more than just lip service to a new economic crime bill that would help enforcement agencies tackle corruption. “I ask the Minister whether he will consider the individuals I have named and impose sanctions on those who have stolen from their country, laundered their money here, used U.K. structures to hide their ill-gotten gains, used the golden visa route to gain entry to the U.K. or committed human rights abuses. Will he act now?”

Hodge’s statement comes as part of a larger shift in the U.K. to take on kleptocrats. Last week the London Times reported that U.S. officials were frustrated with the U.K. over its tolerance of dirty money arriving from former soviet states, claiming that it may hinder the ability to fully impose sanctions on Russian president Vladimir Putin over aggression on the Ukraine border.

A source in Washington told the Times: “Putin doesn’t hold his money abroad, it is all in the kleptocrats’ names and a hell of a lot of it is sitting in houses in Knightsbridge and Belgravia right under your government’s noses.”

​​Paul Massaro, an anti-corruption adviser to Congress, told Forbes: “It is high time that the U.K. begin purging the blood money infesting its system and it is heartening to see MP Hodge address this threat head on by calling for powerful sanctions against known kleptocrats. Naming and shaming works.”

Hodge is waiting to see if the government’s newly expanded Russian sanctions will target UK-based billionaires in the coming weeks.

A spokesperson for Timur Kulibaev and Dinаra Nazarbayeva did not immediately respond to the allegations.

A spokesperson for Alexander Machkevich and Patokh Chodiev did not immediately respond to the allegations.

A spokesperson for Vladimir Kim did not immediately respond to the allegations.

A spokesperson for Bulat Utemuratov did not immediately respond to the allegations.